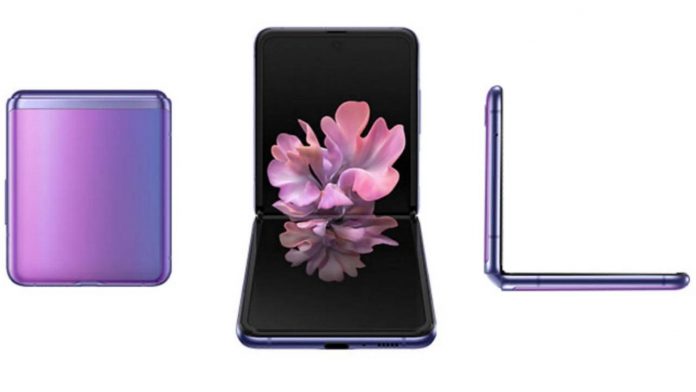 Today we will take a look at the Samsung Galaxy Z Flip.To know why it is the best folding smart phone.

Since last year we’ve seen a lot of smart phone manufacturers pay attention to folding phones. They believe it’s the future of smart phones. The last few months have been great. We have seen the first Samsung Galaxy Fold, Huawei Mate X, Moto Razr 2019, and the most recent Mate Xs by Huawei the future is quite promising.

At the Samsung unpacked event. They unveiled the Samsung Galaxy Z Flip and it looked like the first folding phone. The Galaxy Fold was kind of a phone and a tablet merged together.

Here are some of the reasons as follows 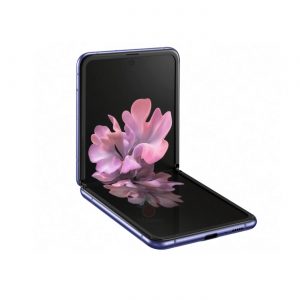 What is more awesome than folding glass (we will explain this shortly) into two halves. Well the Galaxy Z Flip Has a 6.7 inch Infinity Flex Display with a Dynamic AMOLED panel and ultra Thin Glass layer beneath it that folds into two halves.

There is also a 1.1 inch display at the front of the Galaxy Z Flip when it is folded it helps with notifications it can also be used for quick selfies. The Samsung Galaxy Z Flip has Glass at the front and back with Gorilla Glass 5 used as protection for the device.

Color options available here are mirror purple and mirror black. The Mirror Purple seems to be the best color option. because of the colorful hue it display when the light hits it.  fingerprints appear to be a problem because the moment you pick it up your finger print will appear on the smart phone.

The device has a finger print sensor on the right hand side it also acts as the volume rocker. It also adds up as you can use it for quick selfies when it’s folded. One of the major things that makes the Galaxy Z Flip outstanding is the ability to flip it open with one hand.

You can also leave the bottom half flat just like a laptop which is really great. The phone has a noticeable crease at the middle when unfolded. That has been the issue with folding phones so far. We are yet to see the brand that will come with the perfect hinge for Foldable phones.

The phone is slippery but it is sturdier than the Moto Razr 2019 which is made of plastic. Samsung also added brushes inside the hinge to prevent dust, rocks or anything that will affect the display to get into the phone.

The phone has a 10MP camera when flipped open and two 12MP Cameras outside. 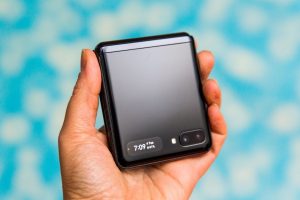 Folding Glass what Happened To the Laws of Physics 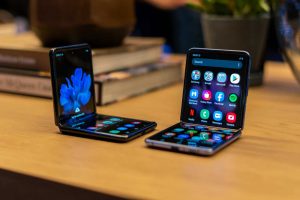 At the Release of the Galaxy Z Flip Samsung Claimed the Display was made of glass. but after some reviews online people knew it wasn’t entirely made of glass.

However Samsung quickly came out to clarify things. the Ultra thin Glass on the display is 30 microns thick with its thickness you expect it to damage from a single touch. 30 microns thick is the same as the thickness of a strand of hair.

So Samsung added another plastic layer to cover this glass but still yet the display is not durable as it scratched easily during the JerryRigEverything test. Samsung is also ready to offer you one time replacement for $119 (N42,850).

The phone runs on android 10 with one UI 2 as the interface which is cool considering how clean the one UI 2 is. It has 8 GB of UFS 3.0 Ram and 256 GB of Storage. It’s more of a 2019 flagship smart phone with all the specs on paper matching the S10.

The battery on the Galaxy Z Flip is just 3300mAh it still better than that of the Moto Razr 2019. Battery optimization seems to be great.

Samsung were able to achieve this by adding two battery to the phone. One at the top half and the other at the bottom half. The phone supports 15W fast charging. It also serves as a reverse wireless charger for other devices.

The Journey to having the best folding phone is gradually getting to its final destination and the Samsung Galaxy Z flip is a proof that the smart phones brands will get it right.

Another issue is the price. Samsung Galaxy Z flip cost $1380 (N496, 800) which is expensive than some flagships of 2020. Samsung is only targeting those that want to stand out and be different in the society.

The cameras are okay. Considering the camera game we’ve seen on some phones this year. then Galaxy Z Flip won’t be an option. I actually feel this phone deserve a better camera to at least justify its price point. 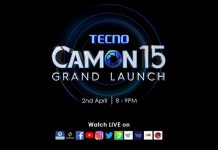 TECNO to Unveil a Brand Ambassador at the Camon 15 Launch 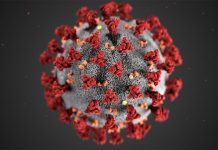 Top 10 Must Have Apps During The Coronavirus Outbreak 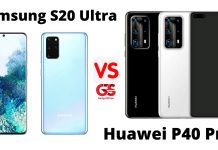